My longtime veterinarian has a theory about pet’s names that she shared with me years ago. I was in the waiting area of her office with my terrified cat when the next patient, a ginormous St. Bernard, was summoned by the vet tech with a cheerful, “Come on, Tiny.”

I laughed about it with the vet later and she said, “You know, animals have a way of growing into their names and they just seem to fit.” I think she’s right and I think it works that way for some people, too.

It’s certainly the case with my wife Joy and it was most certainly true for my friend, Kristel Sweet Wooten. She was simply one of the sweetest souls I have ever known and she died in January at the shattering age of 54.

I’ve avoided writing about her death until now for several reasons but the most honest one is that it just cut too close to home for me. You see, Kristel and her wife Mary were married a few months before Joy and me in the spring of 2014. Like us, they went to Washington, DC to be legally wed and then held a service at their home church in Raleigh, North Carolina a few weeks later.

We could have never imagined that less than two years later, we would be sitting in that same church, once again shedding tears, only this time not the bouncy happy ones but the heavy very wet ones that burn.

I still see those two days – their wedding day and Kristel’s memorial – together, like two sides of a coin. Heads – a long and happy marriage. Tails – a slow but certain fade to darkness. 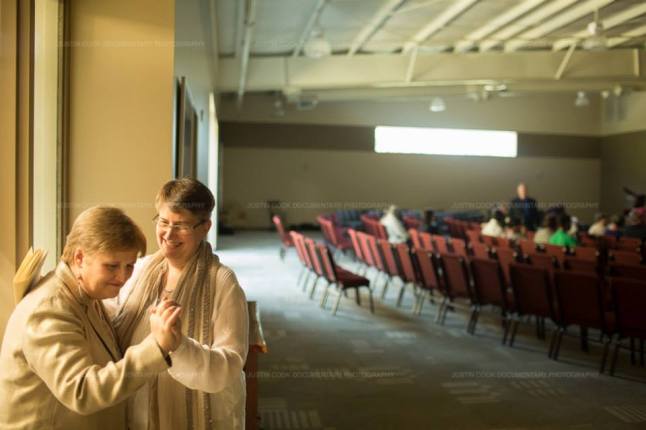 dance on air  Fig. to be very happy; to be euphoric enough as to dance on air. Photo courtesy of Justin Cook Documentary Weddings.

I can picture Mary and Kristel dancing together at the entrance to the sanctuary of their church as guests were arriving on that sunny but brisk afternoon in late March.

It was a little unorthodox for sure, but it was so them. And God, they looked so happy. I’m sure I’ll never hear the term “dancing on air” again without seeing those two on that day.

They made the promises most couples make on their wedding day, not knowing that many of them would soon be tested. Kristel was diagnosed with Stage IV cervical cancer almost exactly a year later.

Maybe it’s good that we never know what’s next.

Stage IV cancer will pretty much coldcock any conversation to a halt.

They shared the news on Facebook in a very straightforward manner and then Kristel set up an on-line journal that folks could sign up to follow. Here’s where I need to tell you that Kristel was also one of the funniest people I have ever met. She had a very southern accent (think Renee Zellweger in Cold Mountain) which made everything she said even funnier. So I was not surprised when she named her on-line site, “Go to You Glow” – a reference to her first IV treatments to flush out the toxins that were promoting the growth of her cancer.

She went through several crushing rounds of chemotherapy and yet her posts remained upbeat and laced with gratitude, another Kristel trait. She even managed to find the upside to losing her hair in her post on September 2, 2015.

I am getting used to being bald and it feels good to rub my bald head. It’s surprising how good rain feels on my scalp and the sunlight and a cool breeze.

Kristel made bald beautiful and fun.

In early September of last year, I made a post about a dear friend from grade school who had just been diagnosed with tongue cancer and was beginning a brutal regimen of chemotherapy and radiation.

Kristel was one of the very first folks I heard from after that post. She private messaged me on Facebook to tell me that I, or my friend, could contact her if she could help in any way. She said, “I won’t play counselor or physician. I could be a confidential friend for what to prepare for. Just an offer, because whoever you love, I love.”

I read her message at my desk that morning and crumbled. I was astonished and humbled by her enormous capacity for empathy in the face of her own mortality.

She went on to tell me the things she wished someone had told her before she began her treatments – like chemo makes you feel like your insides are being stripped out.

And then she did something that I will never forget. She asked me for my friend’s address so that she could send her a hand colored postcard with a word of hope and strength.

I still don’t have the words for this.

I just finished reading When Breath Becomes Air, a devastatingly exquisite memoir by Paul Kalanithi, a neurosurgeon who was diagnosed with Stage IV lung cancer at the age of 36. He died last year before his manuscript was completed and his discerning words have made me think of Kristel a lot. He writes, “I would have to learn to live in a different way, seeing death as an imposing itinerant visitor but knowing that even if I’m dying, until I actually die, I am still living.”

This is how Kristel died – living.

She rode her bike when she could, she went fishing with her family and she started a card “ministry” at her church. And she and Mary went to Oregon last fall for a grand adventure. 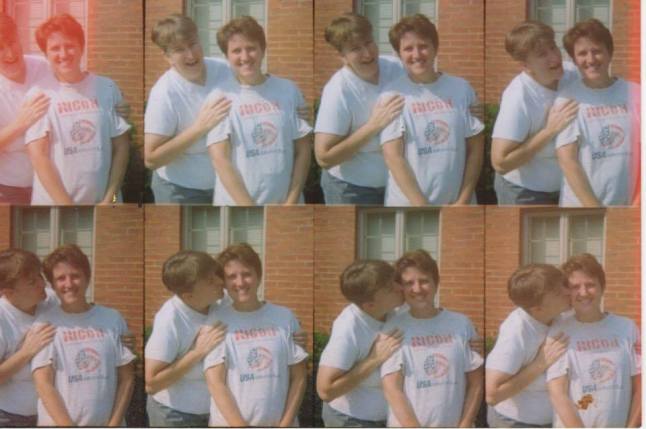 I could or would beat myself up or be miserable about the things I can’t do or the mistakes I’ve made or what I can’t control. Instead, I think I’ll pat myself on the back for doing my best to get over the hurdles and for having a decent attitude. I can’t control what life throws at me but I can control my reaction. August 2, 2015

Her posts became more infrequent and then there was a menacing silence on her site. Finally, Mary posted on January 5th and shared that Kristel was resting comfortably at home and getting hospice care. The end was near and she died peacefully surrounded by family and friends a few days later. 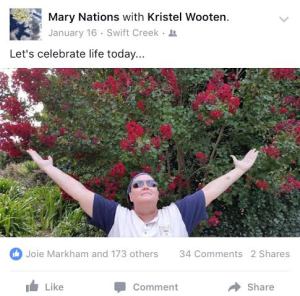 Mary’s status update on the day of Kristel’s memorial service.

Kristel’s memorial service was as wonderfully unorthodox as her wedding. There were plenty of tears but it was a genuine and joyful celebration of life. Interspersed throughout the service were Kristel’s own words taken from her journal posts, now a liturgy of hope and gratitude.

The service concluded with a wonderful responsive benediction crafted from her entry of June 14th.

Leader: As you go out in the world today, remember to smile.

People: Try to stay out of the heat, be thankful for the air conditioning.

People: Be kind to your partner/spouse.

Leader: Hug your friends and parents.

People: And be aware of wonder.

Leader: My love to you all.

We could still hear the refrain of the last hymn, Sweet, Sweet Spirit, as we slowly made our way out of the church:

There’s a sweet, sweet Spirit in this place.

Epilogue: My friend from grade school had a PET scan last week revealing the acronym all cancer patients pray for – NED – no evidence of disease. I can see Kristel smiling at this news.

What’s in a name? Sweet Kristel.

10 thoughts on “When we shall leave this place”