Wedding anniversaries are usually intimate affairs for two, but I recently celebrated my first one with my wife and six men.

The celebration took place at a dinner party gathering of The May 5th Club. You see last May, four gay couples from the Triad all got married on the same day – a Monday no less – across three time zones.

They say there’s no place like home but thanks to Amendment One, we all had to leave NC to marry the person we want to spend the rest of our life with. The four weddings were as different as the four couples but over the course of a wonderful evening together we learned that we all agreed on one thing – being married just feels different.

And we love it.

So I give you Four Weddings and a Squirrel (I’ll explain later.)

They got “maui’d” in Maui on the beach at sunset. I would say it was the wedding of their dreams but they would admit that they planned the vacation first. A few months before their trip, they were sitting at dinner in Asheville one Saturday night and Mark said, “You know, we should get married when we’re in Hawaii.” And that was that.

David has a dear friend who lives in HI who helped them arrange the details and served as their witness. They had a traditional Hawaiian wedding including the blessing of rings sprinkled by a Ti leaf dipped in ocean water gathered from a Koa wood bowl. Koa is a treasured hardwood that represents integrity and strength – a fitting reflection of David and Mark.

They both confessed to tearing up “a little bit” at the blessing at the end of the service but their favorite part was the “after”– a celebration dinner that went on for hours.

As we sat around David and Mark’s table at our dinner that night, I think all of us felt at home. 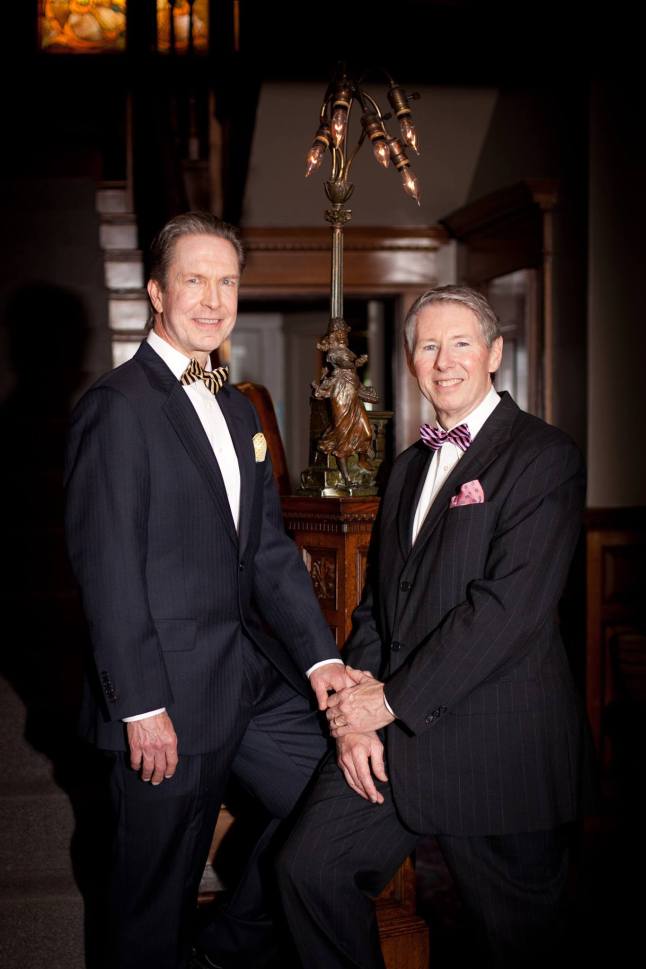 Some trips down the aisle are longer than others and that was certainly the case for Kem and Mark. They had been fast friends for years and after Kem divorced his wife of 32 years, they eventually started going out. “It just kind of made sense to start dating my best friend,” said Mark.

I asked them when they knew it was getting serious between them and Kem smiled his gentle smile and softly said, “When the first thing I thought of every morning was him.”

Mark is the analytical one in the relationship and when the Edie Windsor ruling came down in 2013, overturning The Defense of Marriage Act, he began to think strategically about getting married. “The possibilities became real and I knew we had to get ahead of what was happening here in NC,” he said.

They were married in Seattle because as Kem noted, “We wanted to get as far to the left of NC as we could.” They chose a beautiful B&B in the Gaslight district and were touched by the warm reception of so many strangers at the inn. “Everyone wanted to come up and hug us,” said Kem.

After the ceremony, they drove two hours to Vancouver for their honeymoon and that’s when it hit Mark. He turned to his best friend and said, “This has been a perfect day. We’re married.”

I work with Chad and when he was interviewing for the position a year ago this past February, he told me he was engaged. When he accepted the position, he reminded me that he would need a little time off for his wedding. I said, “Sure, when is it?” “May 5th,” he replied.

Me:  We picked May 5th because it’s the anniversary of our first date.

Me: Where are you getting married?

I’m sure my staff thought we were being taken hostage in my office with all the noise.

It took two proposals for them to seal the deal. Chad proposed to Joey over dinner out one night in a very casual way. He simply said, “So, I think we should get married. What do you think?” To which Joey replied, “No, that is not a real proposal.”

For Joey, it don’t mean a thing if it ain’t got that bling. He wanted Chad to put a ring on it.

Fast forward to the summer of 2013 and Chad and Joey were walking around DC, one of their favorite cities, when they stopped in front of the White House and Joey said, “I think we’re ready, let’s get married.” They were going to do it on the spot but soon learned about the three-day waiting period for a license in DC.

So they decided to wait and do it up right on the anniversary of their first date. They were married in a wedding chapel in the morning and then took a long walk around the city. They once again found themselves in front of the White House and staked out a private space in a nearby park and exchanged their own vows with each other. Their witness was a lone squirrel who chewed loudly on a nut while they poured their hearts out to each other.

Chad’s favorite memory of the day is watching Joey methodically getting ready for their wedding in their room at the Mayflower Hotel. He watched his soon to be husband delicately lay out his shirt, tie and suit – stopping to wipe his eyes after he placed each item on the bed.

I love this story.

Oh, and by the way, Joey got his bling and then some.

I wrote about our wedding in a blog post last summer and although I never tire of hearing the story, I can understand that you might.

Joy and I had been planning a blessing at our church for months. We knew we didn’t want any part of a “pretend” wedding in NC but when it became apparent that legally married same-sex couples would be afforded federal benefits, we decided we should have a civil ceremony. We thought we would go to DC and have our dear friends, Phyllis and Tom, DC residents, be our witnesses at the court-house.

Phyllis would not hear of it and insisted that we be married in her fabulous apartment near Dupont Circle. Phyllis is my mentor and one of my dearest friends on earth and I learned early on that you never argue with her. And really, why would you?

And so we had a beautiful and intimate wedding surrounded by a few dear friends and approximately 2,000 cherry blossoms. Seriously, Phyllis and Tom’s living room looked like the Tidal Basin in May.

And we were both astonished by how completing overwhelming the moment was. We knew we would be happy but to be held in the center of a circle of so much love and to say words to each other that we never dreamed we’d ever be able to was utterly thrilling.

The irony is not lost on me that as we all look forward to celebrating our first anniversaries with our spouses, the Supreme Court is weighing the decision on same-sex marriage perhaps once and for all.

I lost all patience on this issue a long time ago and I can only hope that love will indeed finally win when the Court’s decision is revealed in June. Whatever happens, I know of eight sweet hearts who will forever take the Fifth.

The May 5th Club