I feel as though I’ve been absent for some time now. The thing is, September and October were a complete blur for me and my need to write was extinguished by a series of, well, craziness.

We packed, we moved, we unpacked. Then, I discovered I had not one but two ovarian cysts. This news was followed by a brief walk through a patch of woods that left me covered front to back with poison ivy for three weeks; it was a nightmare. And then, my dog chased a squirrel into the woods and got speared by a tree branch in the process, resulting in a puncture wound and emergency surgery. My poor girl.

In retrospect, these series of events could have been great fodder for blog posts, but I’ve been unable to create lately. I’ve been feeling blocked. And if I’m being completely honest with myself, I haven’t been feeling like this for just the past two months; it’s more like the last year – or longer. I’ve journaled about it, reflected on it, read books and articles on the topic, but I could not figure out what was at the heart of this creative wall.

To help me uncover what was at the core, a few weeks ago, I turned to an online writing series facilitated by friend and poet Jacinta White. Becoming Undone: Unpacking Life’s Weight helped me identify the things in my life that are weighing me down and keeping me from moving forward. My “A-ha” moment came during the first writing prompt, where we had to write a list poem that began with the line: “Daily I carry … ” Without hesitation, guilt was the first word I scribbled in my notebook. 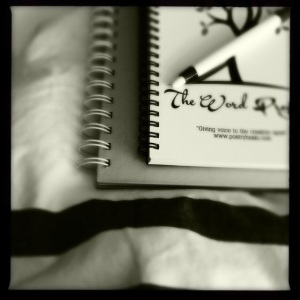