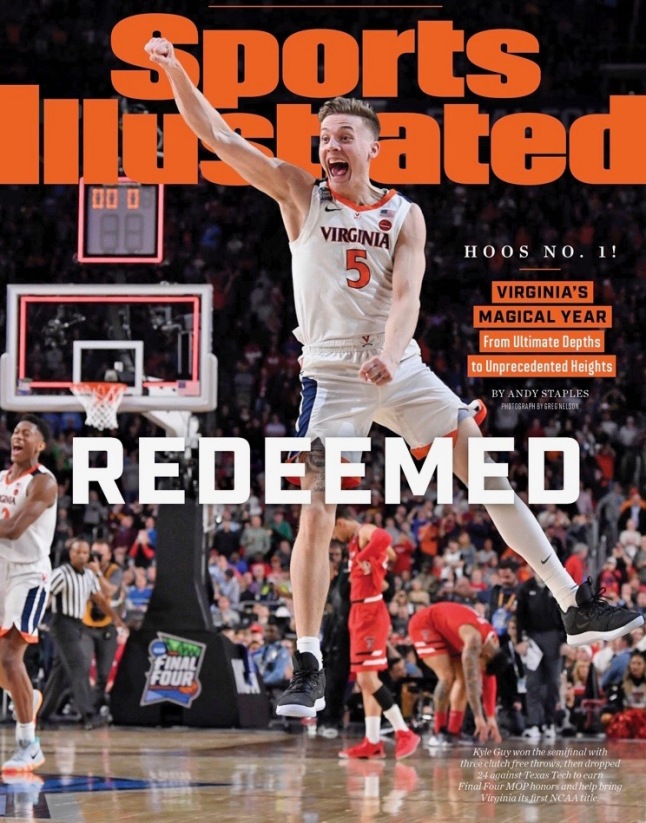 Yes, Virginia, there is a Santa Claus.

I like to think I’m a deep, complicated person, but really there are just a few things you need to know about me to really know me. I love family, dolphins, Jesus, the Rockettes and sports. Not necessarily in that order. And before you haters get all judgy – and you know who you are, for me, sports and family have always been deeply intertwined. I’ll get into that later. Oh, and the other thing I love is being a Virginian. Yes, I’ve lived in North Carolina since 1995, but I will always – always – be a Virginian.

Home is where the heart is. For reals.

This revelation was never more apparent to me last week when the University of Virginia Cavaliers played Texas Tech in the finals of the NCAA basketball championship. ACC basketball is a religion if you live around Tobacco Road as I do and UNC, Duke, and NC State are the Holy Trinity. UVA is treated as that second cousin by marriage that you can’t quite remember how you’re related to.

I was born in Virginia and lived in several cities there for the first 39 years of my life, but none longer than the dozen years I lived in Charlottesville. I can’t imagine that I’ll ever live in a prettier place and it is not surprising that C-ville often pops up on lists of one of the best places to live in the US.

My father was a UVA alum and I grew up going to a lot of Cavalier basketball and football games with him. They lost a lot back then, but it never seemed to deter his enthusiasm for the ‘Hoos – the unofficial nickname for sports teams of the school. He would always say, “We’ll get ‘em next time, Adda (his nickname for me).” Most times, next time took years.

Dad had great seats for UVA basketball – on the floor a few rows back from the team. You could hear the squeaking of the players’ sneakers and the coaches yelling at the refs. As a kid it was all pretty exciting, especially the coaches cussing, and we enjoyed some glory years when NBA Hall of Famer Ralph Sampson led Virginia to two final four appearances.

When my dad passed away in 2002, UVA’s fight song was played on the church organ at his memorial service and his absence was a strong presence on Monday night as I settled in to watch the game. I could almost feel him next to me on the couch. Our father/daughter bonding was mostly done over watching games and I’m so grateful that I inherited his passion and appreciation for sports. Sadly, my dear wife cares less about sports than anyone I have ever known, and she went to bed before tip-off. I was left to virtual watch with my sister in California and my dear friend Chris who lives in Crozet – a charming little town just outside of Charlottesville.

UVA led for most of the game but lost a 10-point lead late. That’s when I grabbed a 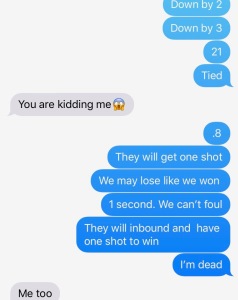 How my sister “watched” the game.

picture of my dad off my bookcase and held it the rest of the game. Laugh if you must, but I don’t think I would have made it through those excruciating last minutes (including an overtime, are you kidding me?!) without him. My sister had stopped watching on TV late in the first half – she couldn’t take the tension and relied on me for text updates. I felt like an old-time Western Union operator sending telegrams. UVA is up by two. Stop. Texas Tech just hit a three. Stop. I’m having a heart attack. Stop.

As victory seemed so secure that even UVA couldn’t blow it, I texted her to turn the TV back on so that she could bask in the victory. When it was over – really over and we had won – I called her and we both sobbed. No words. It was one of the most joyous moments of my life. Oh, and just to be clear –sure, I was thrilled that UVA won, but those tears weren’t for a basketball game. No, they were for my dad. I got to witness one of my father’s wildest dreams come true and that, my friends, truly was priceless. 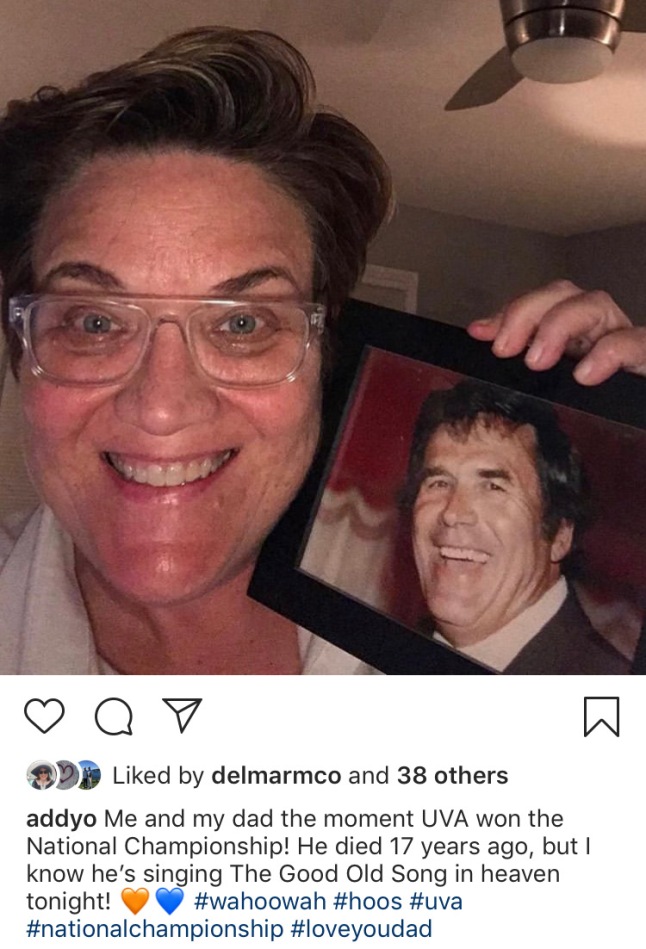 That night – actually, the next day – when I finally got into bed at 2:00 AM, a montage of all the games I’d seen with my dad went through my head. I’m sure I smiled the whole night through and I wasn’t even tired when the alarm went off at 6:00 AM. And the first thing my wife said to me was, “Well, I guess your team won.” Bless her heart.

Yes, “my” team won, but it was so much bigger than that. Charlottesville won. Ever since the Unite the Right rally in August of 2017 when self-proclaimed members of the alt-right and white nationalists marched to promote white supremacism, Charlottesville has been identified with harrowing images of hate. None of us who love Charlottesville will ever forget those images – angry white men marching with tiki torches  on UVA’s main quadrangle and chanting, “Jews will not replace us.” We were completely gutted. 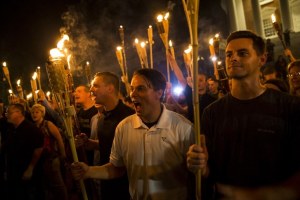 Get off my lawn. Seriously.

That’s why a basketball game felt so important. It provided some healing, if just for a few hours, for a community that really needed it -in the transcendent way that few other experiences can. Chris texted me a few days after the game – she had been down to the notorious Corner – a seven block area of bars, restaurants and shops that serves as the hub of UVA social life. It is the home of Mincer’s, a fourth-generation family owned business selling UVA merchandise since 1948. Mincer’s was where most of my dad’s Christmas presents came from every year, because one really can’t have too many UVA coffee mugs. 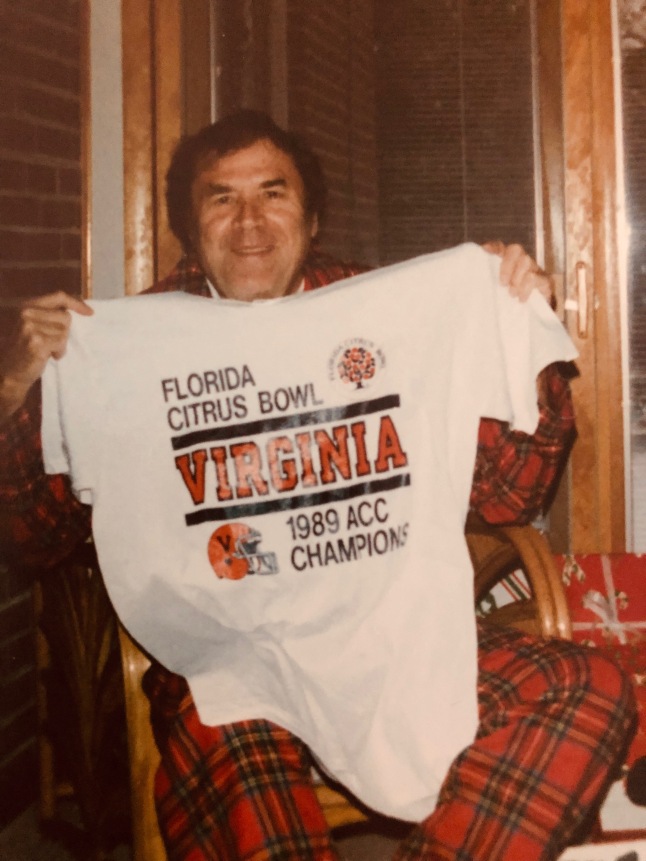 Chris had gone to get her championship T-shirt – the exact same one that the team wore after their victory. She has lived in Charlottesville for over 40 years and those events almost two summers ago wounded her deeply. She texted me an adorable picture of herself in her shirt, and wrote, “It was so cool to see so many people, townspeople mostly, not students, so excited to be buying shirts – young, old, black, white. This is the Charlottesville I know and love.” 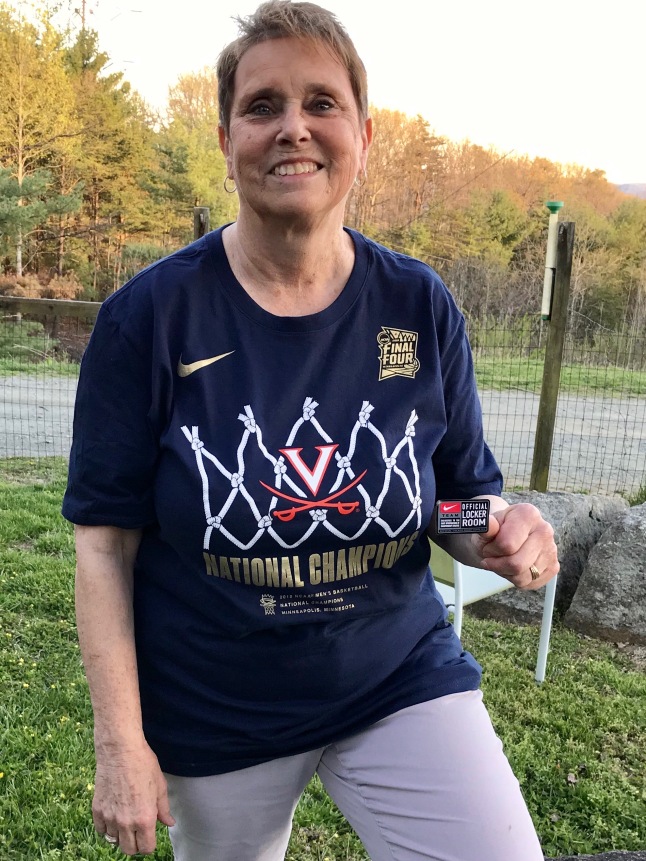 Winning fits Chris to a tee. We have been through a lot of losses together – in all manner of ways.

I am far from naive. I know a basketball game can’t resurrect Heather Hyer, the young woman fatally run over on the Downtown Mall while peacefully protesting the Unite the Right rally, or erase the years of bitter racial conflict surrounding Mr. Jefferson’s University that was built by slaves. As UVA Associate Professor Lisa Woolfork reflected in an op-ed piece for CNN, “They are NCAA champions. They are students who worked diligently in their courses and on the court. They are not hand sanitizer. Their accomplishments should not be used to conveniently expunge traumatic racist history or clean the reputation of this city.” 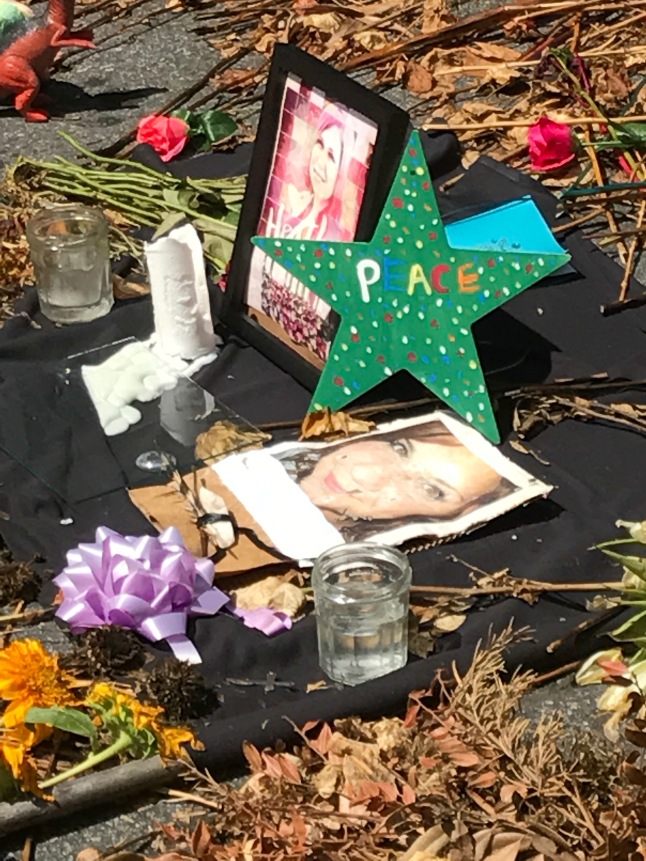 I made a somber visit to Charlottesville a few weeks after the Unite the Right rally.

She’s right. We all love a happy ending and often gloss over the ugly origin while skipping through the agonizing middle, but there can be no shortcuts on the road to redemption. And it can never be a tidy process. We must continue the difficult conversations and we are compelled to sit with discomfort. Our country is deeply broken, and no sporting event on earth can eradicate the deep and painful scars of the past, but for one shining moment in April, Charlottesville felt whole again.

And I was home. 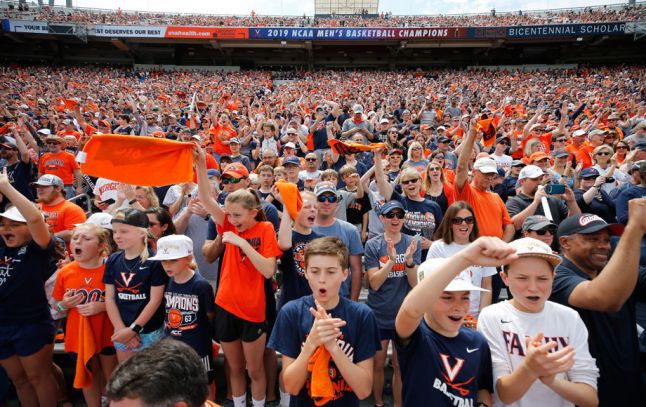 A community celebrates a championship… 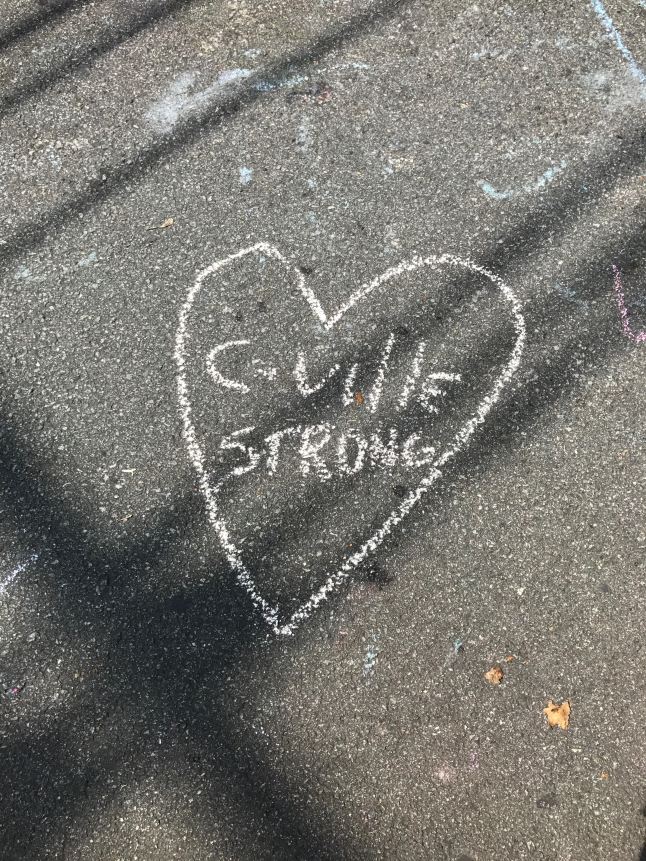 and the journey to redemption for this city I love continues.

9 thoughts on “One shining moment”