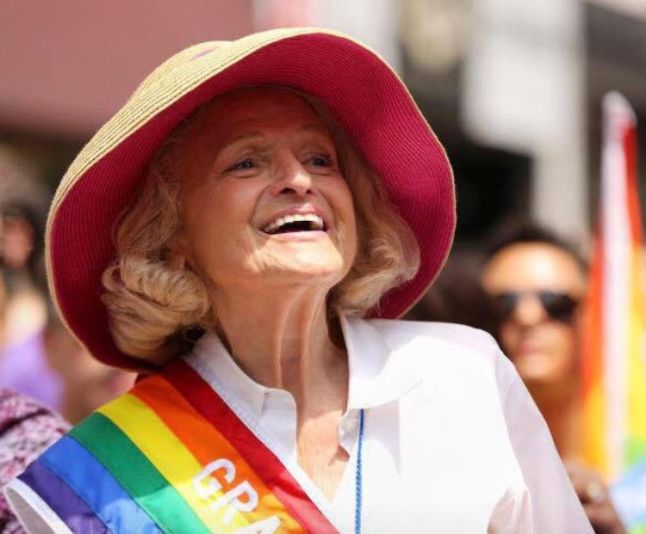 Preface: I first learned of Edie Windsor when I read her wedding announcement in The New York Times in 2007. Little did I know then that she would become the gay-rights pioneer whose Supreme Court case would eventually lead to the legalization of same-sex marriage. Edie Windsor changed my life and the lives of so many gay Americans and their families. Edie died yesterday at the age of 88 and I hope that if heaven exists, Edie and Thea are once again dancing together.  I honor her life and legacy by posting my column that originally appeared in the Greensboro News & Record on July 5, 2007.

I started getting home delivery of the Sunday New York Times a few years ago. It’s a small luxury that I can afford, and it gives me a thrill on Sunday mornings to see that blue plastic bag at the end of my driveway.

I could try to impress you and tell you that when I tear into the Sunday Times, I read the Opinion pages first. I do read them (sometimes) but only after I’ve devoured the Sunday Styles section and, specifically, the Weddings/Celebrations pages.

Five years ago, the Times started printing reports of same-sex commitment ceremonies. That’s when the paper changed the heading of the pages from “Weddings” to “Weddings/Celebrations.”

Howell Raines, then the executive editor of The Times, explained, “In making this change, we acknowledge the newsworthiness of a growing and visible trend in society toward public celebrations of commitment by gay and lesbian couples – celebrations important to many of our readers, their families and their friends.”

The Times printing gay wedding/celebration announcements was important to me for obvious reasons. Any time gay relationships are treated equally – not for better or worse, not for richer or poorer, but equally – is an affirmation for all gays.

Nick Gottlieb and his partner, Macky Alston, were one of the first gay couples to appear in The Times in 2002. Gottlieb recalls wanting to make a political statement that a gay couple could be just as successful, loving and committed as a straight couple. Gottlieb made his point, but he also got a thrill seeing the picture of himself and his partner in the paper.

“It was really nice to feel held up by your community,” he said. “We were made to feel very important, which is exactly what you want on your wedding day.”

I must confess that reading the gay announcements in The Times is one of my favorite guilty pleasures.

My friend, Andrew, gets The Sunday Times, too. And for the first few years of the announcements, we had a standard Sunday greeting to each other which went like this, “Any good gays in The Times?”

I know. That makes us sound really shallow, but the reality is that to make it into The Times’ wedding pages, you have to pretty much possess three things: rich parents, an Ivy League degree or two or three and an important position that includes the words chief executive, managing partner or vice president in your title.

So, reading The Times’ wedding announcements is really entertainment for me, almost like a good beach book. I scan the pages looking for the gay couples first. There are usually one or two gay announcements each Sunday, and not to sound petty, but you see way more gay men than lesbians.

Maybe that’s why an announcement a few weeks ago immediately caught my eye. It was about two women – two older women – even more of an anomaly.

The first line of the announcement read: Thea Clara Spyer and Edith Schlain Windsor were married in Toronto on Wednesday.

I went on to learn that Dr. Spyer, 75, is a clinical psychologist in Manhattan, and Ms. Windsor, 77, is a retired computer systems consultant. Spyer and Windsor met in in 1965 in a restaurant in the West Village.

“Everyone lived in the closet,” Windsor recalled of lesbian life in New York in the 1960s.

Spyer and Windsor went to a friend’s apartment that first night and danced so much that Windsor danced a hole in her stockings. The pair didn’t cross paths again until two years later at a Memorial Day weekend in the Hamptons.

They’ve been together ever since.

My column, not unlike the Times’ Wedding/Celebrations section, is an entertainment vehicle, not the outlet for a political debate about gay marriage.

Maybe we can just agree that many of us – straight, gay, lesbian, bisexual and transgender – grow up dreaming of falling in love and spending the rest of our lives with that person.

Thea Spyer and Edith Windsor had that dream.

One of the last lines in their Times announcement revealed that Spyer has become a quadriplegic as a result of advanced multiple sclerosis.

The announcement ends with a sentence more powerful than any argument that I could ever make for gay marriage:

Dr. Spyer had the help of three aides who traveled with her to Canada to officially marry Ms. Windsor, ending an engagement that began in 1967.

I have another confession to make. I almost always cry at weddings. 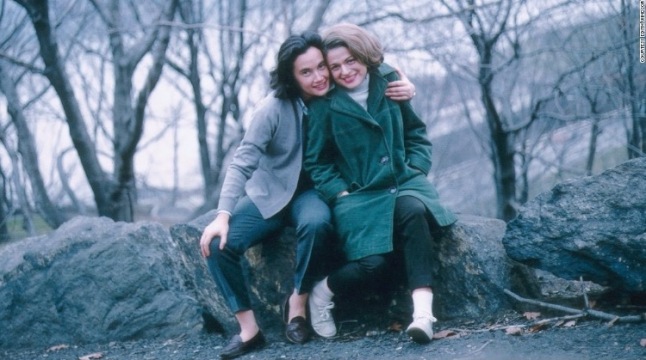 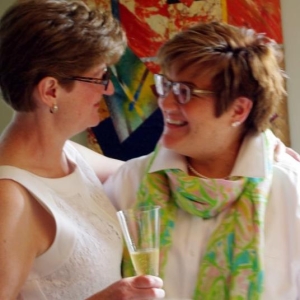 My wedding day. Thank you, Edie.

4 thoughts on “For the love of Edie”