Home has been a moving target for me for a long time now – 15 years to be exact. That’s when both of my parents died and grief ran me into a ditch.  Years later, my emotional GPS has been searching for an alternate route home. It’s a bit like that ring toss game at the carnival. Sometimes I get tantalizingly close to it, but I can never quite snag it. But just like that silly game, I always want another chance even though I know it’s most likely rigged.

Well, last weekend I landed the ring. I found home for a few days in a 220-year-old house in the tiny town of Flint Hill, Virginia. I grew up in the Shenandoah Valley so I suppose it makes sense that the road home would lead there. The five-hour drive from Winston-Salem to Flint Hill is literally a map of my life – Route 29 North through Lynchburg, where both of my parents were born and raised, on through Charlottesville, where I lived for over a dozen years and spent some of the happiest times of my life.

I know that stretch of road like the back of my own hand – every wrinkle, every vein, every scar. I’ve traveled that highway my entire life and there’s a point shortly after you pass through Madison Heights on the way to Charlottesville that you come over the crest of a small hill and get your first full on view of the Blue Ridge Mountains. My heart has always skipped a bit when I get to this spot. Those majestic mountains are in my DNA. “God’s country” as my Dad always said.

Remnants of Hurricane Harvey were chasing us on our drive up last Friday, so my mountains were cloaked in an eerie fog – but I knew they were there. They’ve always been there. This is the road home to me.

My dear wife and I have been spending Labor Day weekend with our friends Phyllis and Tom for the past several years at their country home in Rappahannock County. I met Phyllis 24 years ago when she was my boss at a national non-profit organization in Washington, DC. She was way way up in the management chain and I was a low-level development officer. And she was the most intimidating woman (or man for that matter) I had ever met. I was terrified of her and relieved our paths rarely crossed.

I laugh when I think about those days now. I was such a greenhorn and she was so polished in her tailored suits and high heels. I can’t really trace the timeline of how she became, outside of my mother, the most influential woman in my life. I know she was a mentor and a teacher and in many ways still is. Then somehow, after we both went on to different jobs, she became a dear friend and now is the closest thing I have to a parent – which is kind of funny since she is only seven years older than me. I can’t really explain it but I just know what it feels like. She is the person whose opinion matters most – the person I want to make proud of me – the person I go to for counsel – the person who believes in me unconditionally. I love her beyond measure – although, truthfully, she can still terrify me a little. And I don’t mean that in a bad way. I guess I’m always a little fearful of disappointing her and that keeps me on my toes. 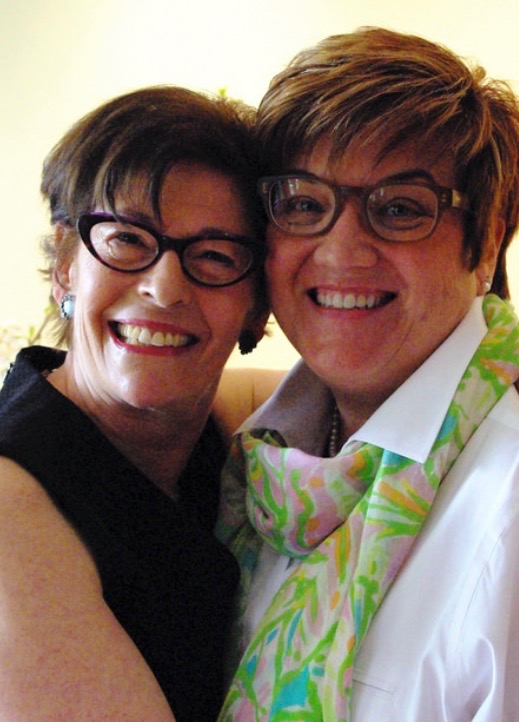 Phyllis and me on my wedding day. I think she was almost as happy as me!

Phyllis married Tom six years ago at their country home, Woodlawn. He is adorable and brilliant – he’s a builder, a painter, a potter and a prolific – if sometimes meandering – story-teller. He is a perfect match for Phyllis and he makes her laugh on a very regular basis. This is a very good thing because Phyllis is a very serious person – that is unless she’s singing and dancing to some of her favorite tunes. She just gets shit done and the world is a better place because of it.

Tom originally discovered Woodlawn over a decade ago when it was a dilapidated abandoned structure in a field in Appomattox County, Virginia. The house was originally constructed in 1797 and Tom had it dismantled, every piece labeled like the biggest IKEA dresser ever, and moved 150 miles to Flint Hill where he lovingly and painstakingly restored it. It is simply amazing.  You can read about it here.

I’m always excited to visit Woodlawn but was even more so this time because my sister from California was back east for a couple of weeks and met us there. Unlike George Costanza, I actually like it when my worlds collide and I love that Phyllis and Tom and my sister have become such good friends. They even pulled off an international surprise together back in May when our trips to Amsterdam overlapped and they showed up at our hotel bar the first night of our journey. The real surprise was that my sister was able to keep a secret for more than an hour.

Amsterdam. We’re going to go on EVERY vacation with Phyllis and Tom. (They just don’t know it yet.)

I could feel my heart swell as we turned on the long and dramatic approach to Woodlawn and glimpsed the most defining feature of the house – its double chimneys.  My sister met us at the top of the steps. She was, as always, dressed to the nines even though it was a Friday afternoon in the country. That girl’s got style for days. She always has. When she was 12, she memorized my mother’s credit card number for the local department store and used it – lying to the store clerk when they asked if she had her mother’s permission. I would have never been able to pull it off and I’ve often said that if I had half of her chutzpah, I could be anything I wanted to be.

She has a huge and demanding job running several breast cancer centers in Southern California and is constantly on one of her two (ugh) cell phones. She’s utterly glamorous and spends more on cosmetics in a year than I have in 60. We laugh at how very different we are in so many ways. And yet, we are as close as two sisters can be. I speak on the phone with her at least once a day and I was giddy to be in the same time zone – much less house – as her for a long weekend.

My parents always made coming home special. My dad would meet me at the front door – even in his later years when he was disabled and on a walker. And my mother would stock the kitchen with many of my favorite things. Phyllis does that, too – a case of sparkling water and several good bottles of big red wine. It’s no small thing to be known in these ways.

Breakfast Souffle. Phyllis is the best cook I know. And I know some very good cooks.

But I really knew I was home later that evening when I went downstairs to the ground floor – the house has four floors – to get something. Sounds carry easily over Woodlawn’s ancient beams and boards and I could hear music playing and laughter and the voices of the people I love. I could hear the clanking of flatware as my sister set the table. It was the sound of family. It was the lyrical sound of the living. I stood very still and listened and let those sounds wash over me like a sacrament.

We were bathed in the warmth of candlelight at dinner – my very favorite kind of dinner – long and leisurely where no one is looking at a phone or a watch or a stupid TV. Jesus, why don’t we do that more often? We all ate and drank too much, well, everyone but Phyllis – she has the discipline of a monk and the figure of Helen Mirren. Probably not a coincidence.

We slowly dropped one by one and said our good nights. I went downstairs again to my sister’s room – I could see from under the door that her light was still on. I gently opened the door to find her reading. I climbed into bed with her and I was 15 again and she was eight and we talked softly for what must have been a very long time before I kissed her goodnight. I climbed the stairs to the top floor and found my wife fast asleep with the lights on – she’d left them on for me. Most vampires get more sleep than me but that night, I slept in what must be what heavenly peace feels like.

There’s a special mojo in the air when you’re sleeping under a roof with people you love. It’s almost palpable. It’s like the best sound machine ever – so good you don’t even know it’s on. I was the first one up on Saturday – it was a deliciously cool and rainy day – the kind my sister and I both love. I tiptoed down the creaky staircase and went to sit on the back porch. That’s another ritual of home – the staggered pilgrimage to the kitchen as everyone awakens. I was lost in my thoughts when I heard a tap from the kitchen window – it was Phyllis – smiling and letting me know that the coffee was ready. 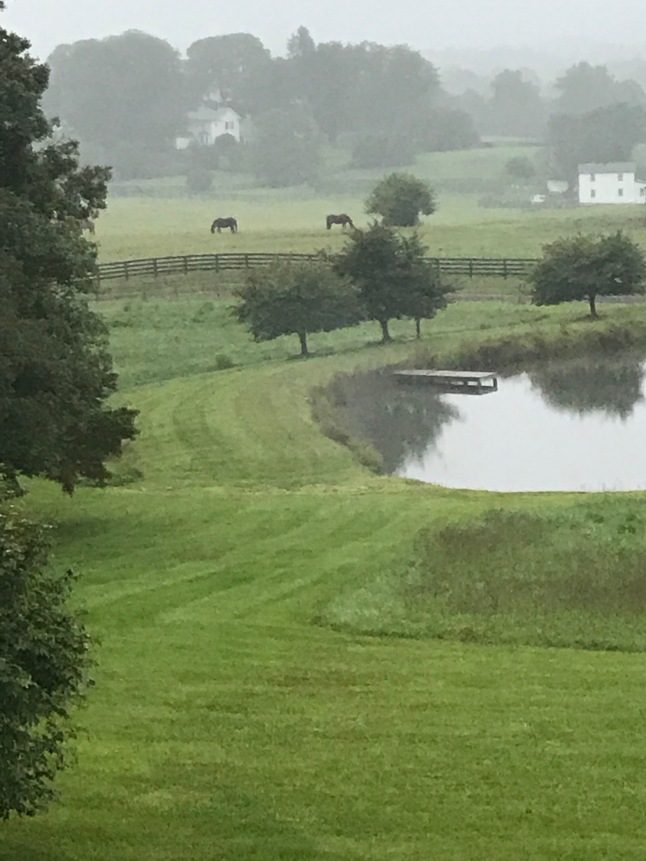 A misty morning at Woodlawn.

I’ve watched enough Hallmark specials to know that a house does not make a home. It’s the people.

I’ve also spent years trying to fill the holes ripped in my soul from too many losses and too many disappointments. Last weekend, I was full in a way that I had not felt in a very long time. You know the feeling – when your heart feels too big for your chest – but not in a tight way. No, in a way that makes you feel whole.

A way that makes you know you are home.

6 thoughts on “The long road home”