Getting my steps in today.

“If you aspire to write, put aside all the niceties and sureties about what art should be and write something that makes the scales fall from our eyes.” The Paris Review, November 9, 2016

It has been almost 12 hours since America elected it’s 45th president and I can still barely move. It is almost 3 in the afternoon and I haven’t yet brushed my teeth. I haven’t been outside but beyond my window, I hear dogs barking, the banging of trash cans, moving cars – just the normal sounds of life.

But today is anything but normal. I am 60 years old and I have a gut full of despair and fear unlike anything I’ve ever felt before. I hate my state and I no longer recognize the country I live in. Breaking News: Love doesn’t Trump hate in the Electoral College.

Spare me your cheerful memes and posts about moving on and the sun coming out tomorrow. It is tomorrow in an America I no longer feel safe in. I am a liberal gay woman and if I were a stock account, there would be a margin call on me today.

I went to bed around 1:30 or so last night before the race was called. I took an Advil PM that didn’t seem to dent my emotional vertigo. I got up when my wife’s alarm went off and went out to sit on the couch in my living room. I did not turn the TV on. I was almost catatonic.

My best friend called me shortly after my wife left for work. I wasn’t going to answer. I didn’t think I could make words but her picture came up on my iPhone and I could not ignore her sweet face. I think I said hello but it didn’t really matter. We both just cried softly. That was pretty much our entire conversation.

She did manage to make me smile for the first time in many hours when she said, “On the third ring, I thought you weren’t going to answer.” She knows me well.

Then I watched Hillary’s concession speech. When she came out on the stage and her staff and friends in the room stood and applauded loudly, I did, too. Right there in my living room in my pajamas. And I cried. Hard. I cried for Hillary because she’s too strong to cry for herself – at least in public. And I cried for myself and all the dreams I had wrapped up in this moment. I cried for Pearl, my 90-year-old friend who was certain that she had lived long enough to see the first woman become president of the United States. And I cried for all my friends who are mothers with young children who have to try to explain how this happened to their sons and most especially, their daughters. 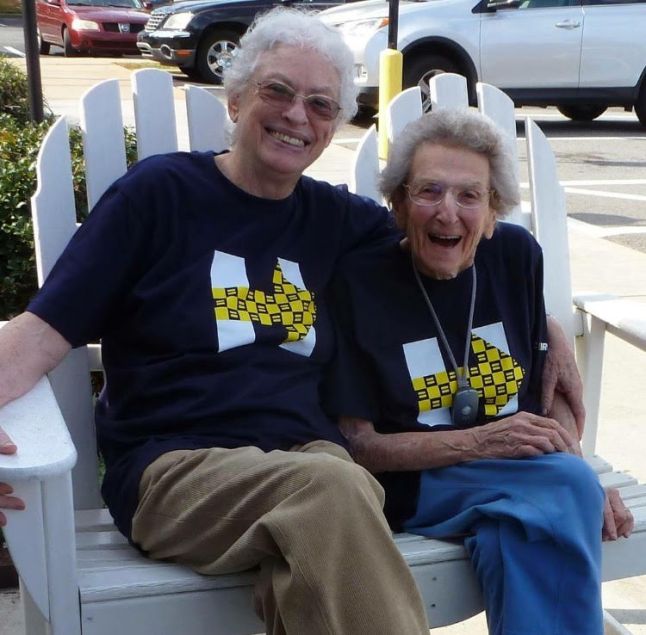 Lennie (left) and her wife Pearl have seen – and made – a lot of history in their 50 plus years together.

I surely don’t have a clue. I can’t even make any sense of it myself.

My friend Susan is a columnist for my local paper and the mother of two daughters. She wrote a brilliant piece in today’s paper, What do you tell your daughter today.

Susan’s 15-year-old daughter felt worried that some of her rights would be taken away by the new president whose track record with women is well, disgusting.. She said she would tell her daughter that “women still have to work twice as hard as men to achieve the same status” and that she may be called “shrill,” or “bitchy” for wielding power in the same way men do. And she said, and this is the best part, “I will tell her to do it anyway, boldly and unapologetically.” My friend Susan is one beautifully Nasty Woman.

Facebook has been like a wailing wall today and it’s good to mourn in public with others. Words like “gutted” and “unmoored” and “devastated”  appeared in a lot of posts. There have been those on the other side, too, but it has been so empowering to use the “unfriend” feature today. It’s rather silly anyway to think that I could actually be “friends” with someone who voted for such a rude misogynist – a rude misogynist who BRAGS about being a rude misogynist.

I suppose we will never bridge the great divides in our country if we don’t actually ever sit down and talk to folks on the other side but I’m simply not in the mood for diplomacy today. I deleted a handful of friends from high school –most of whom never left the small town we grew up in. Maybe they never met a Muslim or a black person or a person with a disability –or a gay person except for me. Maybe they simply don’t care. I just know I have to tend to me right now before I set out to fight another day and reading their negative commentary is not helpful.

I have heard from lots of friends through FB, text and email. And my dear sister who is 3,000 miles away has tried through sheer force of will to take some of my pain away. She is hurting, too, but her empathy for me has been palpable. Her love for me is bigly.

Perspective is everything and a dear friend who is undergoing chemotherapy for breast cancer gave me a good dose of it. She texted me a Bible verse someone had sent her today. I’m Episcopalian and not so up on the Bible but this passage from 1 Peter 5:8-9 was right on time:

“Be alert and of sober mind. Your enemy the devil prowls around like a roaring lion looking for someone to devour. Resist him, standing firm in the faith, because you know that the family of believers throughout the world is undergoing the same kind of sufferings.”

I certainly felt that collective suffering today and I was grateful to grieve with my family of believers – people who know what Hillary told us today  – “to never stop believing that fighting for what’s right is worth it.”

I will always be with her.

But I still want to rant and weep and scream to the heavens. I want it to be okay and I know that it won’t be for a very long time. And I know I have to just be uncomfortable with that.

My wife just texted me that she was picking up comfort food for dinner – for us, that means Mongolian tofu. Yes, we’re elite liberals. And we’ll have some wine on a school night and we will watch a relaxing Netflix series about a serial killer being chased by Gillian Anderson.

As my friend Chris said so succinctly this afternoon, “I know I will move forward, just not the fuck today.”

I won’t stop believing that young Alice and her mom Ann will see that glass ceiling break.