My wife and I will celebrate our second anniversary next month. We were married in Washington, DC five months before same-sex marriage became legal in our home state of North Carolina. We were tired of waiting and we thought that North Carolina would be one of the last sandbags against the rising tide of gay marriage.

And the Old North State would probably still have been holding hands with Alabama and Mississippi if not for the decision of an “activist” (bite me) judge who ruled on October 10, 2014 that the state’s denial of marriage to same-sex couples was unconstitutional.

2014 was a euphoric year for me and for everyone who supported marriage equality as state after state fell into the “I do” column. I went to more weddings that year than I had since my early post-college days when all of my hetero friends were getting hitched. I remember going to Crate and Barrel what felt like every weekend back then to peruse yet another gift registry. The straights love their pizza stones.

And all of those weddings that I attended two years ago were glorious in their own way, most especially my own.

I wanted to marry my wedding day I loved it so much.

I confess that I was cranky (admittedly, not an uncommon state for me) that I had to leave the state that I had lived in and paid taxes in for almost 20 years, the state that my wife was born in, to legally marry the person that I love. That said, we wanted the legal protections and benefits that marriage provided so we had to leave our home to protect our home.

So there we were on a sunny late afternoon in spring, standing in front of a minister, a few dear friends and vases of cherry blossoms. It was a wedding that neither of us had ever dared to dream of and it was so far away from the dark nightmare of May 8, 2012 when Amendment One passed with 61% of the vote.

We were surrounded by light and love and I have never felt more affirmed in my life.  And it took 57 years for me to experience that feeling.

Now the state that I live in and pay taxes in has decided to once again legislate discrimination into law in the form of HB2, the Public Facilities Privacy and Security Act, making it illegal for cities to expand on state laws regulating among other things, workplace discrimination and minimum wage standards. 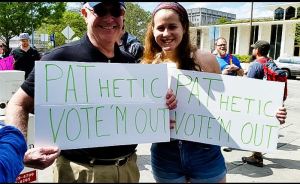 Protesters at a rally against HB2 in Raleigh. Photo courtesy of Mary Nations.

The Republican controlled legislature has reverted back to the fear mongering tactics that have served many states well over the past several years – you know, the old “God, guns and gays” strategy that Karl Rove and his cronies executed so efficiently. Just make it about everything but the real issues and scare the hell out of people along the way.

Instead of genuine concerns like health care, poverty and education, make it about going into the opposite sex restrooms to rape and pillage our women and children. Make it about transgender folks because, Lord knows, they haven’t endured enough harm from inane misconceptions. And for good measure, shorthand the bill by calling it “the bathroom bill” to sensationalize the matter and divert the true discriminatory intent.

Well guess what, Governor McCrory? We call bullshit on your bathroom bill. 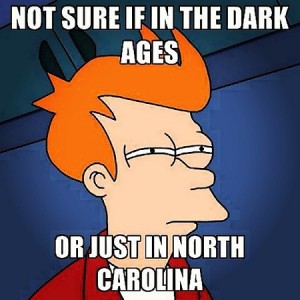 HB2 is unconscionable and it is mean and it is wrong.

And I am pissed off.

For the past 11 years, I worked for an AIDS service organization that provided services to mostly very poor people living with HIV. Their needs were great – housing, food and medical care. They also desperately needed acceptance and affirmation and damned if we weren’t pretty good at providing those things, too.

Stigma is still a huge issue for anyone living with HIV/AIDS and HB2 cultivates stigma against LGBT North Carolinians in disgusting ways by promoting fear and ignorance over understanding and acceptance. And, as these bills always do, it marginalizes the least among us – the ones without money or power or position – the ones who are different. 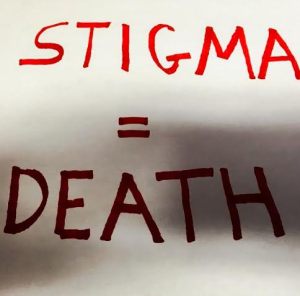 Art courtesy of a brave soul living with HIV/AIDS.

It seems as if every hour another business is coming out against HB2 including PayPal which announced yesterday that it would not proceed with a planned expansion in Charlotte, costing North Carolinians 400 good paying jobs.

Maybe money is the only thing that will get the attention of the governor and the legislature but that makes me mad, too. This shouldn’t be about money; this should be about basic human decency, which should never be a partisan issue.

The past few weeks I’ve revisited the words of the late great Harvey Milk, as I often do in times of civil strife. His words have a clarity and timelessness that fortify me.

What’s at stake in North Carolina today goes way beyond party lines. It is time for all North Carolinians to put their principles over their politics and their paychecks.

It is time for all of us to exchange our vows. 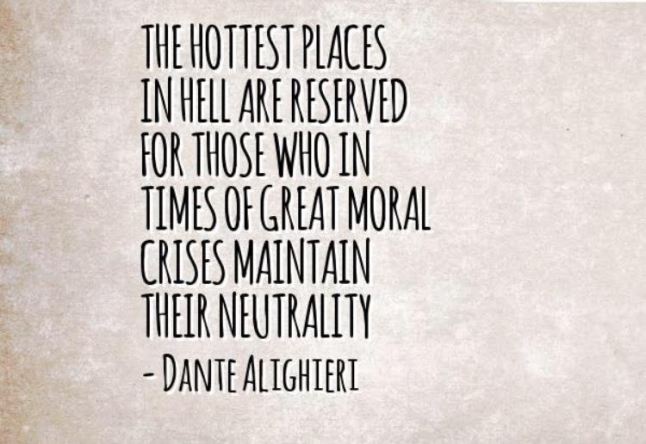 One thought on “The honeymoon’s over”